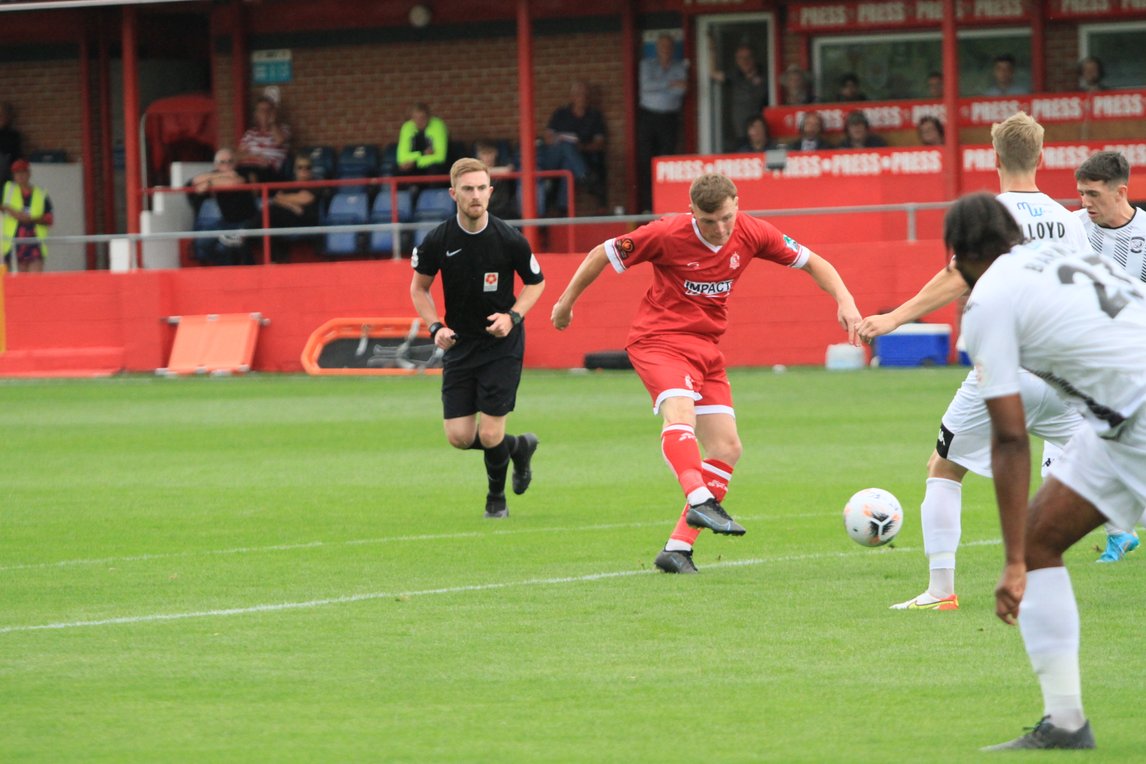 Reds held to a draw by Bulls.

Alfreton Town were held to a 1-1 draw by the visiting Bulls of Hereford FC at the Impact Arena on Saturday (September 3) afternoon in their latest National League North assignment.

Billy Heath’s men made the perfect start with seven minutes elapsed when Bailey Hobson’s low shot from the edge of the area arrowed into the bottom corner after Matt Rhead, making the first start of the campaign, had helped on a Adam Lund throw.

Henri Wilder fired over on 21 minutes before Hereford, managed by former Red Josh Gowling, found an equaliser against the run of play on 24.

Thompson-Sommers fed Ryan McClean who was afforded too much space as he planted a shot in to the back of the net with the aid of a post.

Alfreton tried to respond and the impressive Lewis Whitham showed exemplary control to bring the ball down and find Bailey Hobson with a cute through ball on 32 before Matt Rhead’s well struck shot was held by debutant Bulls keeper Cian Tyler.

With 36 minutes played, the Reds were denied by the woodwork after more good work from Whitham allowed Matt Rhead to set up Dayle Southwell to hit the post from a volley at the left edge of the area.

Josh Clackstone left the field play in a major discomfort on 40 minutes and was replaced by Conor Branson.

Alfreton finished the half the stronger of the two sides as Southwell fired straight at the keeper before Matt Rhead’s weak shot in the final minute of stoppage time was held as sides went in level at the interval.

Within minutes of the commencement of the second period, Dwayne Wiley was denied by a tremendous save from Hereford keeper Tyler who somehow got down low following a scramble in the area.

Just before the hour, Dayle Southwell could only glance his header from a whipped delivery wide of the post.

Alfreton were beginning to dominate and continued to create the lionshare of the chances. Dayle Southwell’s low shot was held after a nice one two with George Cantrill on 67.

With 15 minutes to go, Dayle Southwell embarked on a great run as Matt Rhead’s shot was deflected for a corner, which led to a free header for the impressive Wiley, which he could only direct wide.

In a rare foray forward, Hereford defender Jack Evans fizzed a shot wide with 12 minutes to play as the Reds were forced to settle for a share of the spoils.